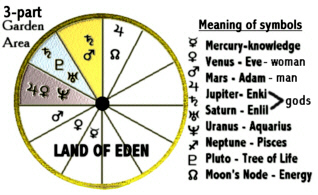 PATTERN FOR THE LAND OF EDEN by Betty Rhodes

The illustration at left shows the Zodiacal wheel depicting the entire Land of Eden, as well as the three-part section representing the garden. Originally, the entire land of Eden represented all continents, islands, and bodies of water upon the Earth at the time when the Sumerian gods, Enlil and Enki, the Anunnaki citizens of Hibiru, the created ‘Adams’ [male and female], and the Nefilim [fallen political party from planet Hibiru], first inhabited the Earth. The sum total of the inhabited communities reflected the pattern of the entire Zodiacal wheel. When the ‘serpent’/Enki left the Garden area he was sent to the fire sign of Sagittarius – out of the Garden proper, but still in the Land of Eden. Biblical scriptures record that he was tossed out of the garden area only.

Notice how Saturn [Enlil] has more authority in the Garden portion of Eden.  The tree of knowledge of good and evil represents Jupiter [the wise one], as well as the Elohiym god, Enki. Rulership of the water house [Pisces] was taken from Jupiter [Enki] in 1846, at which time, planet Neptune was discovered.  Thereafter, Jupiter [Enki], was given rulership of the fire house of Sagittarius. Notice that the Moon’s North Node [serpent’s head] is found in the fire house, along with its master artisan, Jupiter, i.e. Enki.


Mercury = Is reflected in the Nefilim pattern [See "Keeper of the Celtic Secrets" for identity of the Nefilim.  Mercury is at its FALL in the water house of the Garden [Pisces]
Venus = Eve – Reflected in the exalted woman, seduced by Enki in the water house of Pisces - creating her FALL in the opposite sign of Virgo – the Virgin.
Mars = Adam – the first created hybrid man [See "Keeper of the Celtic Secrets"], was removed from Garden and sent to rule the fire sign of Aries, ruled by Mars, and out of the Garden proper.
Jupiter = Enki – the wise one representing the tree of knowledge of good and evil was, sent out of the water house of Pisces to rule the fire sign of Sagittarius.
Saturn = Enlil – the Lord of the Garden ruling both the air and earth houses, but was later removed from the air house in 1781 with the discovery of Uranus when Saturn was found too restricting to allow progress.
Uranus = the Great Age of Aquarius and the coming of the planet Hibiru – home planet of the Anunnaki – to arrive during the Age of Aquarius.
Neptune = the ‘god’ who rules during the Great Age of Pisces – whose FALL is in the air house, sign, and Great Age of Aquarius.
Pluto = the exalted tree of life in the Age of Aquarius, ruled by Saturn but as patterned by Uranus
North Node of Moon = serpent’s head [Lucifer] manifested in man’s religions.
South Node of Moon = serpent’s tail - malefic forces representing the powers Satan.