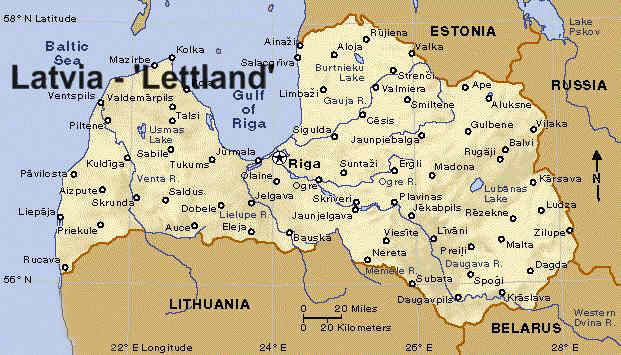 THE LATVIANS
by Betty Rhodes

Latvia was a country that never once entered my mind - until recently. I was oblivious to the Latvian people - couldn't tell you a thing about their history, culture or society; so it was time to do some research into the subject to see who these people were- or better still, where they originated. Cities such as Riga, Madona, Priekule, and Dobele were never part of my vocabulary, but upon viewing a map of Latvia , I quickly became aware of the most obvious - Latvia is an eastern European country bordering the Baltic - nestled between Estonia, Lithuania, Belarus, and Russia.  Latvia's latitude is 57 degrees N at Riga, the capital and largest city, of Latvia. It seems this prized Latvian territory, because of its strategic geographical location, has always been invaded by larger 'bully' nations.
Some not-so-obvious things about Latvia took a little effort on my part, but I quickly discovered that somewhere around 2000 - 2500 BCE, the ancient Baltic tribes arrived in what is now called 'Latvia'. During the Roman Empire days Angles, Saxons and Germanic tribes occupied this Baltic area.

'The Letts, as they were once called (after whom the country was also once called Lettland), were conquered and Christianized by the 'Livonian Brothers of the Sword' during the 13th century. Their country formed the southern part of Livonia until 1561, when the order disbanded and its grand master became the first duke of Courland, a vassal duchy under Polish suzerainty. In 1629, Sweden conquered Livonia (except for Latgale), which it lost in turn to Russia in 1721. With the first (1772) and third (1795) partitions of Poland, Latgale and Courland also passed to Russia. Slightly more than half of the population consists of Letts and of the closely related Latgalians (both widely known as Latvians today). About one third of the people are Russians, and there are Belarussian, Ukrainian, Lithuanian, and Polish minorities http://www.bartleby.com/65/la/Latvia.html).  [In 1991 Latvia re-established its independence from the Soviet Union.]

The territory was once a famous trading route "from the Vikings to the Greeks", traveling the river Daugava.  Latvia's seacoast in Europe was especially known as a place for obtaining amber - of all things.
Amber, the fossilized resin of ancient trees, is formed by pressure and and a whole lot of time. Many species of trees are responsible for creating Amber, but the main source of fossil resin is still a mystery. The amber-yielding pine 'PINUS SUCCINIFERA', was described as the mother tree of Baltic Amber - the earliest known fossil resins. 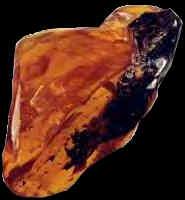 The biggest deposits of Baltic Amber were formed about 40 million years ago, as Amber was carried by the river flowing from the north and deposited in sediments called "Blue Earth". The river's delta, rich in Amber, extended as far as the eastern part of the Baltic Sea.  In the Baltic region, for the ancient Romans and ancient Greeks, ( Homer), amber was used for jewelry, medicine, and as a stone for spiritual healing. Plinius once said, "a small carved statue of amber is more expensive than a slave". The name 'amber'  is derived from an old Arabic word "anbar"). To the French it is: ambre, English: amber, Deutsch: Bernstein, Danish: rav, Greek: elektron (if you rub amber on a cloth it becomes charged with negative electricity/ that's the origin of the word electricity) - BET YOU DIDN'T KNOW THAT - me neither.

Latvia's most ancient inhabitants (some 4000 years ago), were built on the larger scale, as far as stature goes - shall we say size 1X - 3X, guess they would need to shop at the 'Tall Man/Big Man' stores along the Baltic Sea for their kilts. Not only were their frames large, they had big heads too. From what I read, the skulls of these early peoples, discovered from ancient cemeteries recently found, were large with a distinctly oblong shape. They also had broad, high faces and protruding noses. Massive, broad-faced peoples dominated northern and northeastern Europe, while gracile, narrow-faced forms are found most often in Middle Europe and the continent's southeastern areas. I've read somewhere that the largest people in the world are Nordic, and the smallest in stature are Italian.  [My son, who is 6'5" tall, and tops the scales at over 250 lbs, definitely fits the description of these ancient Latvians. His large frame comes from his paternal grandparents, as the grandparents on the maternal side were rather short in comparison, including dear old dad who was a full foot shorter.]
"As is at present accepted by nearly all anthropologists, the shape of the head is the most stable characteristic of a given race" (Jew. Enc. IV (1902), 335).

Sometime during the Atlantic period, narrow-faced populations gradually moved into northern and northeastern directions; reaching the Baltic region only during the Bronze Age. The first settlements of Latvian ancestors naturally settled along the Baltic coast - they had to stop once they reached the Sea - hey, would you want to backtrack after months of migration? But, maybe they arrived by Sea to begin with.
The language of these Baltic dwellers belong to the Indo-European language family, which leaves you standing in a wide open field listening to echos bouncing off the distant mountains, because this means a group that encompasses Aryan, Armenian, Albanian, Greek, Italic, Celtic, Germanic, Slavic, Tokharian, Hittite, and others. But, as far as I'm concerned, you can't rely on language alone because of all the 'monkey-see, monkey-do' factors that come into play.  This had to be true even back in the earliest times. Look at most kids today, in America anyway, speaking with 'Jive and hip-hop' speech-like sounds - an alien would think the kids all came from a different species than did the adult humans in the region.  Have you ever been on the CB listening to the truckers in those 'big rigs' with the eighteen wheels?  They must all be from Dixie, because they all have that southern draaaaawl; or perhaps they learned the dialect at trucker school. So I wouldn't put much faith in language - too many variables. Many linguests say the nearest relatives of the Balts are the Slavs, and the Balts have retained the original language sounds better than any other living Indo-European language. It seems that the ancestors of the Balts and the Slavs became separated from the other Indo-Europeans at one time, and the two (Balts and Slavs) remained together for a period of time so the two languages would become one, blood types would also  become mixed due to marriage, the ability to track any anient people becomes muddied water. The Baltic languages are divided into Eastern Baltic and Western Baltic languages. There are only two 'live' Baltic languages today - the Latvian and the Lithuanian language, both belonging to Eastern Baltic languages.
So where did the ancient Latvian Baltic people with big heads and size 3X kilts come from? That's what a lot of people would like to know, but the jury is still out evidently, because I can find no agreement among scholars.  I will tell you a few of the facts and let you decide their origins, but first take a look at the 'blood chart' below. On this chart you will see the close similarities of Egyptians, Jews (from Poland), and the Latvian peoples.  Notice too, the wide difference in blood types with other peoples, such as the Andamanese, or the Peruvian Indians, for example. Now this chart gives percentages for peoples in todays countries, not 4000 years ago.  Cemeteries are now being found in the Baltic region that are from these ancient peoples and they will soon have the DNA to determine whom they most closely relate.
For now what proves to be a best indicator is DNA and blood types to determine origins, rather than language. True, blood types don't remain constant due to inter-marriages, but there is more evidence in blood types than in language. Viewing the Blood Identification Chart below, notice how the Latvians and Egyptians have almost identical percentages. (A fact noted by researcher Andis Kaulins http://lexiline.com)

Jewish Population in the Latvian Republic
From: http://www.heritagefilms.com/LATVIA.html

Before World War I there were about 190,000 Jews in the territories of Latvia (7.4% of the total population). During the war years, many of them were expelled to the interior of Russia, while others escaped from the war zone. In 1920 the Jews of Latvia numbered 79,644 (5% of the population). After the signing of the peace treaty between the Latvian Republic and the Soviet Union on Aug. 11, 1920, repatriates began to return from Russia; these included a considerable number of Jewish refugees. By 1925 the Jewish population had increased to 95,675, the largest number of Jews during the period of Latvia's existence as an independent state. After that year the number of Jews gradually decreased, and in 1935 had declined to 93,479 (4.8% of the total). The causes of this decline were emigration by part of the younger generation and a decline in the natural increase through limiting the family to one or two children by the majority. Between 1925 and 1935 over 6,000 Jews left Latvia (the overwhelming majority of them for Erez Israel), while the natural increase only partly replaced these departures. The largest communities were Riga with 43,672 Jews (11.3% of the total) in 1935, Daugavpils with 11,106 (25%), and Libau (Liepaja) with 7,379 (13%).
The region was conquered and Christianized by the Livonian Knights (13th century) and later fell to Poland (1561), Sweden (1629), and Russia (1721-95). German merchants and landowners had reduced the population to servitude, but in 1819 serfdom was abolished. Russian replaced German as the official language in 1885. Latvia became independent in 1920 but was forcibly annexed by the USSR in 1940. It was occupied (1941-44) by the Germans in World War II. After the war Latvia was returned to Soviet rule, and the economy was nationalized. In 1990 the Latvian parliament voted in favor of independence from the Soviet Union. Following the attempted coup (1991) against Soviet President Gorbachev the Soviet government recognized Latvia's independence, but the withdrawal of troops was not completed until 1994 (by Russia). In 1993 Latvia signed a free-trade agreement with Estonia and Lithuania. Guntis Ulmanis became president in 1993.

HATTI, homeland of the Hittites, was one of the most powerful near-eastern empire of the second millennium B.C. The heart of HATTI-land and Hittite power was located in central Anatolia. From terrible wars to peaceful and prosperous trade, the Assyrians and the Egyptians learned to respect the Hittites.