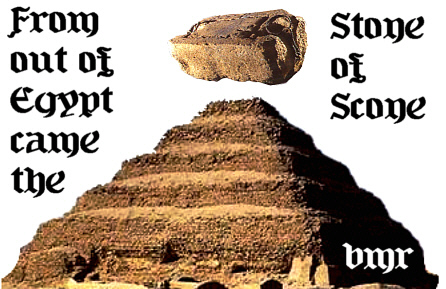 The Stone of Scone, aka the Coronation Stone [possibly from King Coniah the last legitimate king of Judah][see below], is a block of sandstone that today rests within the coronation throne of English monarchs, and previously crowned over this rock was Scottish and British monarchs.

millennia they took the stone that was intended to top the unfinished pyramid at . This stone is called Jacob's pillar stone, or the Stone of Scone, which today rests beneath the Coronation chair in the United Kingdom, but in truth, it was actually the stone that was meant to cap the Step pyramid that Joseph built. Why was the pyramid left unfinished? Why did they save this particular stone???? And why does the Great Seal of the have this pyramid as part of its official seal??

The Great Pyramids of were built by the Extraterrestrial space-travelers thousands of years ago and have never been duplicated in engineering and technique, although many have tried, including Imhotep/Joseph.

"In the capital of the Scottish kingdom [Scone] was a venerable fragment of rock, to which, at least as early as the fourteenth century, the following legend was attached: The STONY PILLOW on which Jacob slept at Bethel was by his countrymen transported to EGYPT. Thither came GATHELUS, son of Cecrops [Calcol], King of Athens, and married Scota, daughter of Pharaoh. He and his Egyptian wife, alarmed at the fame of MOSES, fled WITH THE STONE to Sicily or to SPAIN. From Brigantia, in Spain, it was carried off by...the favorite son of Milo the Scot [Gathelus], to Ireland...On the sacred Hill of Tara it became 'Lia Fail,' the 'Stone of Destiny.' On it the Kings of Ireland were placed." ("Historical Memorials of Westminster Abbey", by Arthur Penrhyn Stanley. John Murray, London. 1876. P. 57). 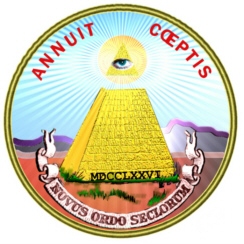 Tanist: a sacred king, according to the systematic interpretation of mythology developed by Sir James George Frazer in his influential book "The Golden Bough",  who represented a  king solar deity in a periodically re-enacted fertility rite. The concept of the tanist or substitute for the sacred king was taken by Sir James Frazer and incorporated as a central element in his study of European mythologies, The Golden Bough.
Tanistry (Irish/Gaeilge Tàinste;Scottish Gaelic: Tànaisteachd) was the office of heir-apparent, or second-in-command, among the royal dynastys of Ireland and her off-shoot nations.